The history of henna is a long one. Henna has been used since the Bronze Age to dye skin (including body art), hair, fingernails, leather, silk and wool. In several parts of the world it is traditionally used in various festivals and celebrations. There is mention of henna as a hair dye in Indian court records, in Rome during the Roman Empire, and in Spain during Convivencia. It was listed in the medical texts of the Ebers Papyrus and by Ibn Qayyim al-Jawziyya (Syria and Egypt) as a medicinal herb. In Morocco, wool is dyed and ornamented with henna, as are drumheads and other leather goods.

Use of henna for body art has enjoyed a recent renaissance due to improvements in cultivation, processing, and the emigration of people from traditional henna-using regions.
Henna is a small shrub with small, dark green scented leaves. The leaves are dried and ground down into a powder which is finely sieved two or more times through a fine nylon cloth. These filtering process results in removing the coarse fibres from the powder , making what is left finer and easier to use.

In India henna - or what is known as mehendi -  is also a way for a bride and groom to get to know each other before an arranged marriage. A variety of traditions underlie the use of henna, including wedding games and legends. For example, the groom's name is usually written somewhere within the bride's henna, if he cannot find his name within the intricate design, the bride is said to have the control in the marriage. Also a dark henna design for both bride and groom signifies that the two will have a strong relationship. Also the longevity issue is particularly important to the bride because she doesn't have to do any household work during the period she bears her wedding henna designs. This is probably the first and last time in her life that she'll be a lady of leisure so she does make an effort to preserve the work for as long as possible. (Not so sure about the truth in this last statement but it makes for a fun trivia fact anyway!)

No wedding in India is complete without mehendi. All the girls on the bride's side look forward to the day when the mehendi lady comes by. Sometimes she is accompanied by a couple of others, but they all come armed with the necessary tools for that perfect mehendi  - henna powder, eucalyptus oil, tea decoction, lime juice and sugar! She takes the henna powder in a bowl, adds the tea till it becomes a thick paste (similar to a dough). Then eucalyptus oil, sugar ansd lime juice are added and mixed well to make it into a smooth and thin paste. Then she fills a cone (sort of like a pastry cone) with the henna, ties it at one end and lets her imagination fly....

The expert takes turns drawing her elaborate designs on the girls, but saving the best and most elaborate for the bride. Its amazing to watch them draw their creations. All through this - which can sometimes last an entire day day - the girls sit around and gossip. Since they cannot move around too much, food and unending cups of chai are all brought to them. Then after the mehendi has dried, they scrape it off but are careful not to wet their hands. Usually by the next morning, the red would have turned to a deeper crimson, almost bordering on black, which can last for up to 2 weeks!

Here are some beautiful hennaed hands and feet.....what incredible skill. These are artists in their own right! Images via flickr's public sharing.
Posted by Kamini at 9:53 AM

I have a post on mehndi saved up in my drafts somewhere... :) I love mehndi!

I love mehandi..atleast love looking at it. For me I just don't hve the patiece to put it and my wedding was a struggle :-)

Oops GB...didn't mean to steal your thunder :-) You know what they say...great minds think alike!!!
Anu - I love mehendi and for that I have the patience. Spent a whole day with my girlfriends at my wedding getting it done!
Anpu - Thank you!

FROM THE RIGHT BANK said...

I had this done once and I'm dying to have it done again! :)

Oh the images are so pretty... Love the design.. so intricate.. and the girls who use the cones.. are truly artists.. they are so super quick.. and they do it with such ease... Wonderful post!!

Mmm...reminds me that mehndi season is just round the corner with the festival season coming up. Starting with teej, then rakshabandhan and then diwali :)

:D gosh, no stealing any thunder Kamini...I'm more of the "great minds think alike" bent!!!though greatness is highly debatable in my case!

My 5 minutes of fame on Apartment Therapy 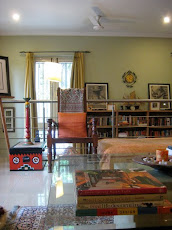 Would you like your home, art, anything of yours featured on my blog?

Very often I come across things of such beauty, I feel compelled to immortalise it for ever by recording it down someplace and sharing it with others, especially those who are equally turned on by aesthetics and design as I am. This blog is that perfect place! It could be something as simple as a photograph of a gorgeous flower blooming in the midst of a brutal summer, or as elaborate as a fabulous art show by an eminent artist. So really, it is about anything that touches any one of my senses in the form of beautiful design, captivating music, delicious food, exciting art and photography, anything that makes me happy....the list is endless! I hope I can do justice!

A few of my favorite things

Fellow bloggers who have been kind enough to mention me....

My interview on Prismma 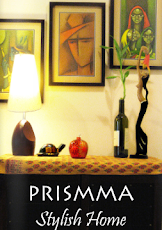 My first recipe on TDAC

My second recipe on TDAC

My third recipe on TDAC

My guest posts on other blogs

Pictures of our home

This is a Flickr badge showing items in a set called House summer 2011. Make your own badge here.

Blogs of artists and painters:

Feel free to use my pics. You don't have to give me credit, just don't claim them as yours!

Quote Of The Day :

"The Master in the art of living makes little distinction between his work and his play, his labor and his leisure, his mind and his body, his education and his recreation, his love and his religion. He hardly knows which is which. He simply pursues his vision of excellence in whatever he does, leaving others to decide whether he is working or playing. To him, he is always doing both."